I recently responded to a request for advice regarding floorcoverings that had reportedly begun to lift in a recently refurbished hospital A&E department. After the previous floorcoverings and adhesive residues had been removed, F. Ball’s Stopgap 1200 Pro was applied to create a smooth base for a waterproof surface membrane. Once the membrane had cured, it was primed using Stopgap P141 (used for non-absorbent surfaces) and another layer of Stopgap 1200 Pro was applied prior to securing vinyl safety flooring.

Upon visiting the site, I saw that the failure followed a straight line, creating a ridge in the newly installed vinyl sheet floorcoverings, which covered a total area of about 120m².

An underside inspection of one area found that the raised vinyl corresponded with a 20mm wide movement joint, which had been filled with a levelling compound as part of works prior to the refurbishment.

Movement joints (also called expansion joints), are spaces that are commonly and deliberately incorporated into a building’s structure, including its floors, to allow it to accommodate stresses and strains exerted by movements as a result of heat, moisture and environmental forces. As was the case at the hospital, they are usually filled with a flexible material, such as rubber, which absorbs compressive forces without damage and also acts as a sealant.

Where movement joints are situated, a flooring installation should be terminated either side of the joint and a cover fitted – subfloor preparation products and floorcoverings should not be installed over the top. It was reasonable to conclude that movement at these joints had caused the flooring to rupture. Not only did this look unsightly, but it produced a trip hazard.

It’s always worth asking about the locations of expansion joint where they are not visible because they may be hidden by previous work as in this case.

Based on this assessment, we were able to recommend remedial work to be undertaken either side of the joints rather than removing the entire installation and starting again. 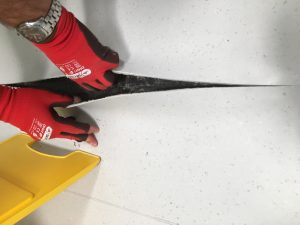 This was followed by the application of a single coat of F. Ball’s Stopgap F77 solvent-free epoxy waterproof surface membrane, meeting the previously applied material to maintain a continuous barrier between excess subfloor moisture and floorcoverings and adhesives.

The surface was then primed using Stopgap P141 before another layer of Stopgap 1200 Pro was applied to bring the areas that were being repaired to the same level as the rest of the floor and create a base for the receipt of new floorcoverings.

When the levelling compound was dry, safety flooring could be installed over the repaired areas, either side of the expansion joints, using F. Ball’s Styccobond F44 solvent-free acrylic emulsion adhesive. The seams between the new and previously installed vinyl sheet floorcoverings were welded to maintain a watertight seal required in the clinical setting. 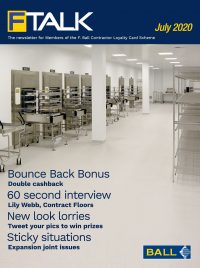 Pressure sensitive adhesive for use with Stopgap Isolator Membrane.

5% 'Bounce Back Bonus' and your chance to win a great garden set.

Project of the month: The Secret Garden project

F. Ball helps support the welfare of NHS staff in Leicester during the coronavirus epidemic.

A round-up of your latest tweets.

Thanks a million NHS