The Scottish and Northern heats of F. Ball’s annual golf championships have taken place in their respective regions.

Flooring contractors from across Scotland and the North of England took part in separate competitions, with each playing an 18 hole round. The three best performers from each regional competition will have the chance to compete in the national final in September.

Stirling Golf Club was the setting of the Scotland Golf Day, in view of Stirling Castle and the surrounding hills of Lomond and Ochil. The winner of the round was Bruce Edwards of Gordon & Halliday Ltd, with Craig Stockman of McGarry Flooring coming second. David Brady from R&J Flooring Ltd came third.

These contractors will now go forward to play in the national final, where they will be joined by the top performers from the Southern and Midlands golf days. The final will take place at a venue in the Midlands in September. 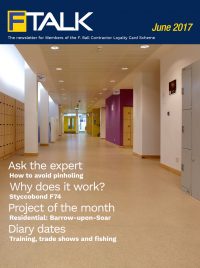 Some of the recent highlights on the F. Ball Twitter page!

Dates for your diary coming up over the next couple of months.

Ask the expert: how do you avoid pinholing?

F. Ball technical experts advise on how to avoid pinholing.

Why does it work? Styccobond F74

What is Styccobond F74 and why does it work?

Five Black Box dash cams are still up for grabs!

Project of the month: Extension with floor-to-ceiling windows

This month we look at a residential extension in Barrow-upon-Soar.

14 flooring professionals from around the UK visited F. Ball in May.