Contractors from CS Flooring of Surrey were hired to install floorcoverings in Studios 1, 3 and 4 at the new stand-alone rehearsal facility.

They began by priming the raised plywood subfloor in Studio 1, the largest of the studios, measuring 140m2, using F. Ball’s Stopgap P131 primer. When used over absorbent surfaces, Stopgap P131 is designed to promote adhesion and prevent the rapid drying of adhesives and levelling compounds. If a levelling compound dries too quickly, it may result in poor strength build-up, potentially leading to floor failure.

Designed specially for use over flexible subfloors, such as metal or plywood raised access flooring, Stopgap 700 Superflex was selected to withstand the heavy foot-fall the floor was expected to be subject to, as well as movements in the subfloor caused by rehearsing actors and dancers. It is also suitable for use over normal underfloor heating systems like the kind installed in studio.

Following the same process undertaken in Studio 1, contractors prepared the plywood subfloors in Studios 3 and 4, which are used as smaller-scale rehearsals or as office spaces and divided by a retractable soundproof wall that can open to create one larger space measuring 28m2. This time, contractors installed cork rubber tiles using F. Ball’s Styccobond F3 flooring adhesive.

With over 50 years on the market, Styccobond F3 is recognised as the UK’s most used flooring adhesive for the installation of textile floorcoverings, and it can also be used for installing secondary latex and rubber foam backed carpets and cork tiles up to 3.2mm thick. It is a water-based rubber/resin flooring adhesive which offers excellent wet grab and benefits from an early build up of strength. It is also protected against bio-degradation and compatible for use with over 70% of the 6,000 floorcoverings in the F. Ball Recommended Adhesives Guide (RAG).

Commenting on the project, CS Flooring director, Chris Slater, said: “F. Ball is one of our go-to brands because you can always trust in their products. Their technical representative was very helpful in recommending which products to use, especially when deliberating which adhesive would work best with the cork rubber floorcoverings. For such a high-profile theatre, we were very pleased with the standard of the studio floor finishes.” 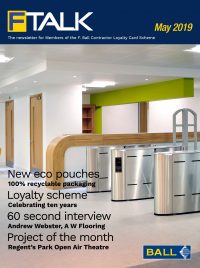 Focus on floors: your questions answered

More answers to your questions

60 Seconds with Andrew Webster from A W Flooring