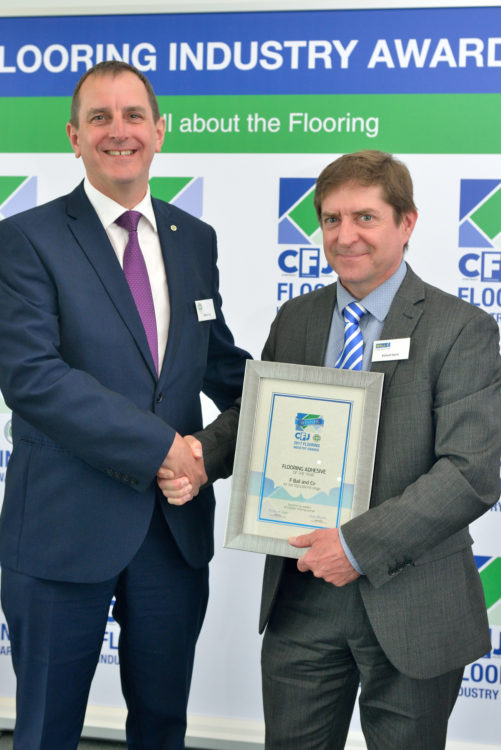 F. Ball has won the adhesives category at the CFJ/CFA Flooring Industry Awards 2017, for the entire Styccobond range.

The Styccobond range includes adhesives for installing almost every type of decorative floorcoverings, including textile, resilient and wood. The range includes Styccobond F3 flooring adhesive, a firm favourite among flooring contractors for the installation of textile floorcoverings for over 50 years, as well as specialist adhesives, such as temperature tolerant, pressure sensitive, conductive and tackifier adhesives.

The most recent innovation in the Styccobond range is Styccobond F49 Hybrid PS, a temperature tolerant, water-based, pressure-sensitive adhesive for bonding a wide range of floorcoverings, including vinyl sheets and tiles. It has been specially developed for use where floorcoverings have to be tolerant of temperature fluctuations between -20°C and +60°C, such as conservatories and areas where floor to ceiling windows result in extreme solar gain.

The award was received on behalf of F. Ball by the company’s marketing manager, Richard Harris, pictured with Richard Catt, Chief Executive Officer of the CFA.