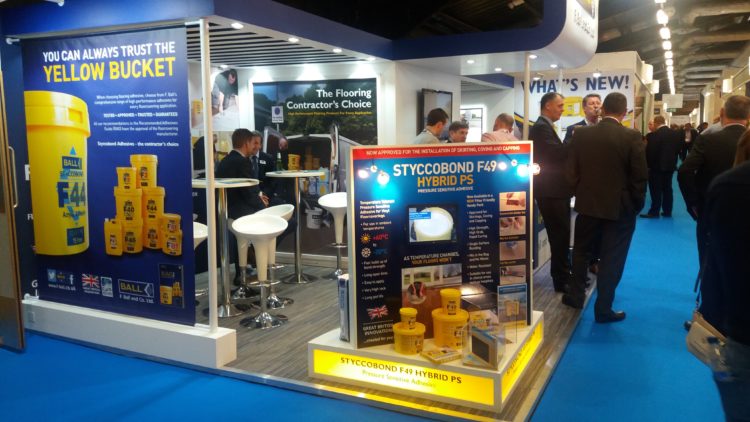 F. Ball has showcased its most popular high performance flooring products at this year’s Flooring Show in Harrogate. F. Ball also used the show to launch an innovative, 500g Handy Pack size of its revolutionary temperature tolerant, pressure sensitive adhesive Styccobond F49 Hybrid PS, which is now approved for use on vertical surfaces. The new packaging is designed to deliver added convenience and minimise waste.

A range of F. Ball products were demonstrated in the CFA/FITA/NICF Demo Zones throughout the exhibition, including Styccobond F49 Hybrid PS, which was successfully launched at last year’s show.

Commenting on the show, Richard Harris, F. Ball Marketing Manager, said: “The Flooring Show has been a tremendous success this year. It was great to talk to people in the flooring industry, including manufacturers, contractors and retailers. It also gave us an opportunity to thank our customers for their continued support, including those who voted for the Styccobond range to win the adhesives category at this year’s CFJ/CFA awards.

“Excitingly, we launched a smaller, innovatively packaged version of Styccobond F49 Hybrid PS. This is ideal for contractors who are installing flooring accessories on vertical surfaces, such as skirting, coving and capping, providing an alternative to traditional contact adhesives.”